Well as it turns out I turned 41 yesterday.

I spent a chunk of the weekend holing up at B+J's cabin on a hilltop overlooking Bear Lake. Just me and CK--my favorite husband (I've had two). Basically we ate food and luxuriated in quiet living. We didn't even leave the cabin once. We just stayed in for two nights and a few days. I read a lot and CK worked a bit and we listened to a ton of chill music.

It was nice. It had a different flavor than last year when I turned 40. I spent the day on a cave-beach in Costa Rica with some of my most beloved people, drinking straight-up out of a freshly cut coconut. And when the sun started to set, everything turned a celestial gold--the water, the waves, the rocks and the sky. The entire scope of my eyes was incomprehensibly luminous and dazzling, and it was like I wasn't on this planet anymore. It was like a naturgasm. Yeah, that's what it was...a naturgasm. When nature is so unbelievable you sort of lose planetary consciousness and you land on a different dimension for a few moments.

I had one of those when I visited Spiral Jetty. And the Needles Outlook in Canyonlands. And so many others, really. I've had a lot of naturgasms. (Let me brag, yesterday was my birthday.)

But this year I needed the Cabin of Quiet because the day before was Iris' Zombie Birthday Party. Remember that event? It turned out to be probably the best birthday party we've ever hosted because it was LOW KEY. We played LOW KEY games (basically, CK and I turn into zombies and chase the kids around the Green Room) and we had LOW KEY entertainment (CK dressed up as a Mad Scientist and performed LOW KEY zombie chemistry experiments which was really just candy making) and LOW KEY cupcakes (emoji-ring cupcakes from WALMART HEART EYES HEART EYES HEART EYES) and LOW KEY decor (everything was black!) and LOW KEY costuming (old clothes and black eyeliner smeared on those little faces).

I came into motherhood at the height of kid's birthday fashion and I am telling you what--sham! Don't believe a word of it. The less preparation and money spent the better you're off. This is what 41 years of wisdom looks like. One time my friend Carina had us over for a kid's birthday party which was a plastic sheet with a hose for a "slip n slide" and some Popsicles, and the kids almost hyperventilated with happiness. You could not peel them away from that watery affair.

Anyway, Iris was glowing as an appropriate Princess Zombie (with some sign of the occult on her forehead? I didn't ask questions...) and so full of dreamy satisfaction after the party it was just the best.

But it was also loud. I mean, we had horror-themed tunes and kids screeching and zombie noises for our hours coming out of the cracked windows of our home. It was loud and it was dirty and no, I would never in my lifetime eat one of those emoji-ring WALMART cupcakes but I was so glad when the kids did happily.

So a retreat to a semi-secluded hilltop cabin with a yellow cake with chocolate buttercream frosting CK and I made over the course of a few days was just what I needed to thank the Universe for probably the most perfect year of being 40 I could ask for, and welcome a new year to come.

One in which I hope doesn't include the undead, in general. Oh please, please I pray.

(Unless it's just my mom dressed up as a zombie, I mean that stuff is good.) 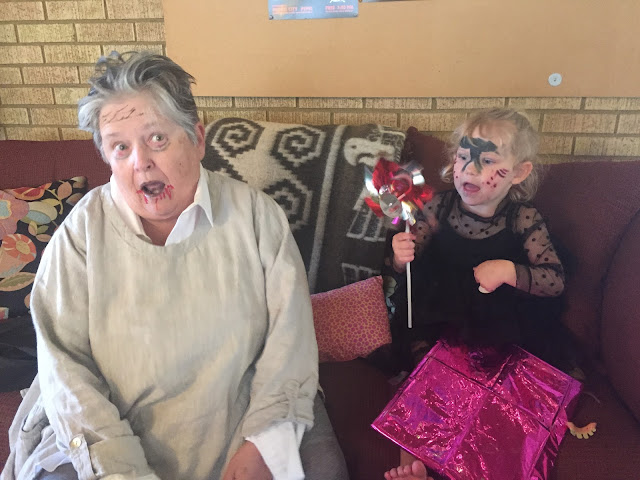 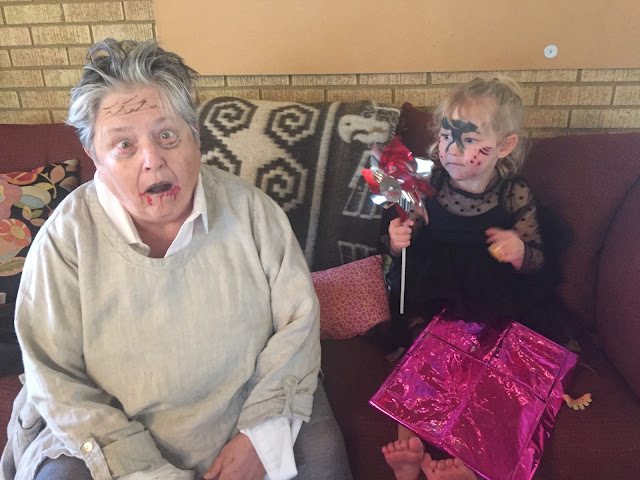 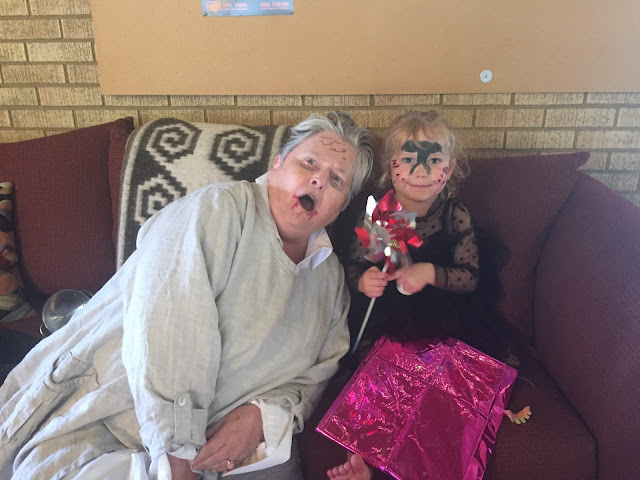