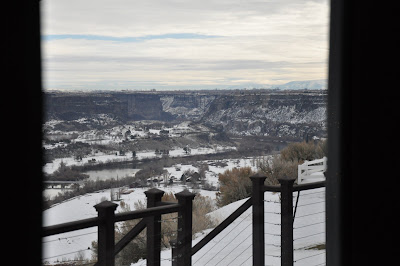 It is cold here in Idaho. Ice, snow and a freezing wind. The canyon out our window makes a wide hole in the earth and stays still. Today is the last day of the year.

I feel a desire to resolute myself. I want to wake up tomorrow a better person. One who is determined to see the changing year as a baptismal of soul. I need not introduce my bad habits and creeping negativism to 2009. As far as I am concerned they can be contained in the year that was 2008.

I welcomed you with a baby swimming inside my ready-made placenta.

I ended my 30th year, thereby official became a thirty-something.

We bought a second home, Retro House an unassuming structure of wonders.

In so doing, became a mother.

And Chup a father.

I realized the secret to happiness is to continually fall in love.

To give the soul reasons for butterflies.

And babies, they'll do it to you.

Then two months or so later.

We had my sister's children in the family car traveling across the desert.

To a new life and new home.

And the world, coming to our rescue.

Nights where I didn't know if my sister would survive.

Mr. Nielson coming to live with us.

We eat mountains of oranges.

Kentucky gets a clean screen from her re-occurring cancer.

Stephanie transferred to Utah to be near to her mountains.

And, now before 2008 shuts its doors on us forever, she has come home.

(And in 2009, there will be more details, but for now, know that your prayers had much to do with it and we thank God for them.)

If any one year of my entire existence holds more sweet and sour than did 2008, I will be mortally surprised. I'm young though, and who knows what God will ask of me in years to come. He asks me to endure and then sends angels of every degree to help in the task. It is the definition of surreal. Try it sometime. (Or don't.)

But for my Heavenly Father I have decided that I will welcome 2009 with a resolution to focus on beauty. To see more, to feel it more, to identify it in others. The beauty in the natural. An un-Photo Shopped photograph, the acres of sagebrush from here to Utah, The Chief's dancing eyebrows. The beauty in the recovery. My sister, her husband and the children. Then, after all is quiet again, the rediscovery of my Chup and my baby alone in our once-riotous home.

But for now, beauty that no matter what I am an offspring of God who loves me . . .

. . . even on bitter cold days in fertile lands of Idaho.
Email Post
Labels: Year in Review