Why Not Five More? 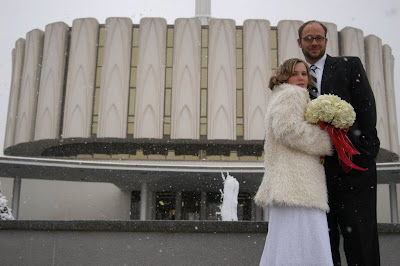 While I was in Arizona last weekend Chup and I marked our fifth anniversary of being sealed in the temple. We had good intentions early on in our marriage of celebrating such feats, but by year two (or so) we were saying "happy anniversary" with the same gusto as "thanks for folding my socks." We're just not normal like that.

Last week I called Chup to give my simple "we made it one more year" sorta speech but found that my husband was instead taking Claire and Jane out on a date in my absence. How dare he? Adding insult to injury was the fact that I was the recipient of hourly photos--via my phone--documenting their enjoyment.

There they were having dinner at Cafe Rio. Smiling, bean filled mouths.

There they were moments before a movie. Popcorn popping.

There they were shopping after the movie for late night gifts.

And there I was, alone, having a tuna fish sandwich. Getting crazy with the pickles.

The rubbing-in ended the next morning after I found the last fun photo on my phone. It was of Claire and Jane holding a bakery box of fresh donuts like a trophy for the Saturday morning donut run. Loads of sprinkles too. The girls were smiling as if all of their dreams had come true over night.

Funny. It's same feeling I felt five years ago.

That Chup, what a guy.
Email Post
Labels: Chup