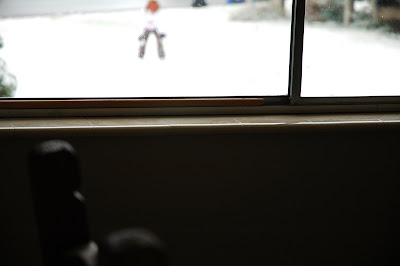 I think the trick to waking up sleepy children is to bribe them with things to come.

It seems to work on cold mornings when two little girls complain about getting out of their warm bed to a world of school and teeth brushing. I've used this bribery tactic from Day One and my testimony of its power was realized this morning.

When weeks are such that I can't remind them of a holiday or a trip around the corner, because either events have happened or are too far away to happen, I have a back-up plan.

"One of these mornings . . ." I say quietly and slowly, pulling back their sleepy bed-headed mops. "you are going to wake-up and look out your bedroom window . . . instead of green grass and yellow-colored mountains the world will be covered in white. It will be like magic."

This eventuality has always pulled the slumber out of their little souls.

"Snow!" Jane dances on the mattress.

Then we talk about how Jane wants to eat the snow. And I say "not the yellow snow" and she says "Of course not the yellow snow." Then Claire wants to know if the snow will stay on the little hill in the backyard so that she can go down in on a sled. And I say "Eventually the snow will stick." And then Jane says "It always snows on Christmas in Utah!" Then I just say a silent prayer that this December 25 brings with it a magical blizzard. Is that too much to ask?

And this morning it happened.

I awoke to the wind blowing our giant lilac bush. It was heavy with snow. I ran downstairs to tell the girls. It was if I had pulled the fire alarm. The girls were up! Dressed! Gloves! Hats! A foot-tall snowman was rolled around and left on the front porch to melt in the afternoon sun! I gave up trying to feed them breakfast. What was the use? Jane ate fistfuls of (only) white fluff. "It just tastes so good!" I even saw them hugging eachother on the front lawn.

As I watched from the kitchen window I was grateful to see that the snow had not made a liar out of me.