Orange You Glad I Remembered? 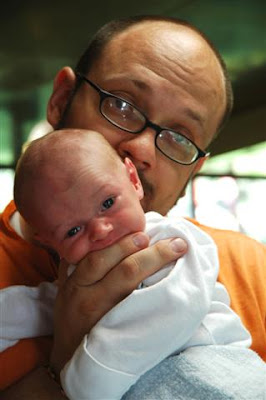 Tonight I was rocking The Chief in the dark of the nursery. As the chair rolled forward-and-back so did my thoughts of my sister in Arizona, to her children in Utah. I thought about the details of Stephanie's surgery tomorrow to Claire's Orange Tuesday wherein she'll have to wear something color appropriate to First Grade. And then I wondered into the near future if Jane will have to actually wear an article of clothing when she has Orange Day or if she could just show up.

I could hear Ollie down the hall talking to Chup as they snuggled in bed. They have become the best of friends those two, with Ollie spending most of his day down in Chup's dungenous office working on fixing old remote control helicopters and discussing the model car collection. As you can imagine, Ollie was King for the day with all the cousin's clothing donations (we are set for several years . . . if not decades) some of which included costumes of the Buzz and Spidey variety (currently now in constant rotation!)

I thought about how a couple hours earlier I searched the house for Chup and The Chief finally finding them in the same place I sat now, rocking together looking like twins separated by time. They were both wearing the same shade of brown, and looked at me with the similar expression (forehead furrowed) as I entered the room. When I saw Chup I noticed that he was crying (I hope he doesn't mind me tell you as such . . . too late) which prompted the obvious question.

"I love this baby so much." he said with a quiet voice.

The recollection of this recent memory reminded me of one thought I hadn't examined in a really long time.

It had been totally neglected and forgotten. No call had been made to the Provo Bakery for sugar cookies, no plans for dinner, not even a small gift idea had entered into my mind. I had not so much even mentioned it in the past week, and while that is utterly understandable, I was shocked at my obvious oblivion. Forgetting your spouse's birthday is not a practice that I recommend . . . it tastes like guilt.

Luckily I have The World on speed dial, ready and willing to be ready and willing. I put together a small date night which may include a quiet trip to Costco and burritos at El Azteca, but whatever. We lost fancy a while back.

But I must say, this experience of taking on my sister's children has made something out of our marriage that I had never seen before. I think it might be summed up in the word power. I look at Chup--intimidated out of his mind--who wakes up with a grin and goes to bed with sore arms from all the lifting of little ones. And he is doing it for me. For me, and for my sister, and for his brother-in-law, and for these children. There is fortification in the sacrifice, and I believe in marriage more than ever.

Happy Birthday Chup, next year I will get you a pony.


Steph and Christian Update: Doctors told us today that both are doing as well as expected, if not better. Their bodies are responding to the healing. They must be feeling our prayers.
Email Post
Labels: Chup