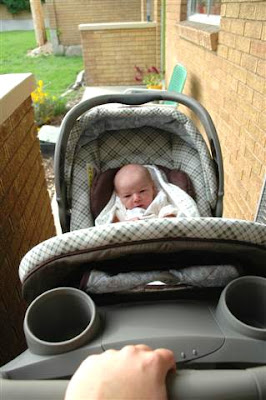 I really thought that after having a baby I'd be all sore and lethargic. I imagined staying in bed for weeks while my mom took care of all the details. There would be housecoats and robes and warm pajamas for me to wear.

Well, that is what I thought.

In reality, I have more energy than I have had in months! I feel like I could jet to the moon. Some say it is the cocktail of hormones floating in my bloodstream. Whatever it is, I like it. A lot. Still, I can't figure out why my "regular" clothes don't fit. Remember? I am not pregnant anymore? Hello? I had to have lost some weight in the process.

With all this energy I decide to take my little cub bear, The Chief, for a short jaunt. My mother who has been staying with me as of late had to go to some meeting (always some meeting) and I was alone for the first time. Wanting to look presentable in case I met up with neighbors, I put on some of my ye old maternity clothes hoping that nobody would notice. Bonus being that though I still looked pregnant, I had the child in the stroller to prove by evidence.

The Chief really liked our first time outing. His eyes darted back-and-forth as we headed around the block. This is really a fantastic time to have a newborn. There is so much to talk about. Those are primroses. That is a lilac bush. Over there is an apricot tree with little buds. Then, as a joke I told The Chief, Remember these details because there will be a quiz later. But only I laughed at that because The Chief's sense of humor is dormant right now. It's cool.

As I turned the corner to head home, feeling quite confident in my mothering skills, I noticed a car pulling up to the side of me. Out of it popped an old boyfriend, one who I hadn't seen in some time. He looked at me as though there was some recollection of the babe I used to be. Then he said my name like it was a question.

Confidence. Out. The. Window.

"Thought that was you." He replied.

"Just taking the baby for a walk." I explained. Remember I just had a baby? Give me a break for looking a little bloated. Just a little.

"Yes, so this is the little guy." He answered.

Then the conversation went along like so except I felt so utterly self-conscious that I was sure that I had forgotten to tuck something somewhere so that something somewhere was hanging out where it shouldn't be. There is a lot to keep track of these days, you know what I mean.

I even felt embarrassed for feeling embarrassed and though it was so good to see my friend, I found myself wishing to be upstairs in The Retro House with my K-mart house dress next to a stack of burping cloths.

We continued to converse (me, trying to concentrate) until The Chief interrupted by screaming. He just screams, screams, screams, holds his breath for five seconds and resumes. It about scared the nurses to death in the hospital. I think it's sorta dramatic. And cute.

"Is he okay?" Questioned my friend.

Then I really wanted to be home because I am sure my face was more red than The Chief's screaming visage. I instantly thought of all the things that come to mind when one mentions the "s" word. It wasn't pretty.

Just as I was half-melted and ready to bolt, my mother's all-important meeting let-out and she came driving up in her swanky convertible.

"Oh hi Dallas!" She called out to my friend, awkwardly calling him by the wrong name, making me feel a galaxy-less embarrassed for myself. Her faux pas instantly took the pressure off me and whatever might be leaking, peaking or sneaking out.

Since then I have learned two things:

2.) My mom is the best.
Email Post
Labels: Postpartum