Just Beyond My Bleach

Saturday marked The Chief's four week existence as a air-breathing human. We were so excited about this lifetime achievement that we celebrated by eating some of Azucar's Bulgarian croissants . . . good grapenuts I can't remember what they were really called . . . dipped in meringue. The Chief loves his Aunt Azucar, this much I do know.

As the late afternoon approached I grew more and more anxious. My first postpartum hair appointment was rapidly approaching and I didn't know how The Chief was going to take the salon. Born into a sibling-free home, our baby isn't really comfortable with loud sounds as it were. The buzzing of hair dryers could easily stress our newborn to his roots. But speaking of roots, mine were just too obvious to ignore. Mommy needed her bleach. Oh! How Mommy needed her bleach! LIKE A HUMP NEEDS A DONKEY!

I knew I could leave The Chief with Chup if needed. Chup is really into The Chief. For instance, I am no longer Chup's screen saver. I know, I could've seen this coming, but it just hurt too bad to prepare myself. I also knew that The Chief would probably be fine for a couple hours without me, but I wouldn't be fine. I went to my parents house the other day (up the street) while The Chief was asleep with Chup. My heart nearly broke into pieces of splintered glass. Nevermind that the total time I was away equaled seven minutes (thirty-four seconds). NEVERMIND I said.

When it was time for me to go The Chief was happily snoring away (baby snores are so adorable, much more managable than adult snores) (same thing goes for baby toots)(toot!toot!) and I heard a still, smallish voice say, Leave him here with Chup. All will be well.

As a principled saint, I don't ignore that still, smallish voice. So I kissed The Chief two millions times, made Chup promise three million times that he would call me if anything should arise and I headed out (heavy, heavy hearted) to my appointment.

For the first hour I did pretty well. I love my color coordinator Ashlee who has the distinct honor of being both intelligent and witty (plus excellently efficient). We're at the point in our relationship where we really dig. We talk about the details of my digestive habits, her adventures as a temple worker, our chest sizes and the contestants on So You Think You Can Dance.

What? Your stylist doesn't work at the temple?

Then, when Ashlee went to fetch some foils I quickly texted Chup to see how things were going. He replied with this picture: 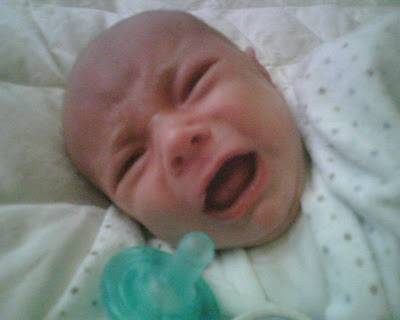 What was left of my heart stopped beating. My baby! He needs me! That stupid, inefficient wannbe-nipple won't help him! I've got to get home!

Quickly I called Chup. He answered with this, "Let me call you back."

And so on, and so forth.

Finally when my head looked like a human antenna Ashlee seated me under the dryer. I breathed in, I breathed out. I waited like an addict for a fix via my phone. I tried to think of things like The Chief's first Christmas and his bite-able foldy ears. I waited, I dried, I bleached, I panicked, I calmed, I waited.

And suddenly my phone beeped. 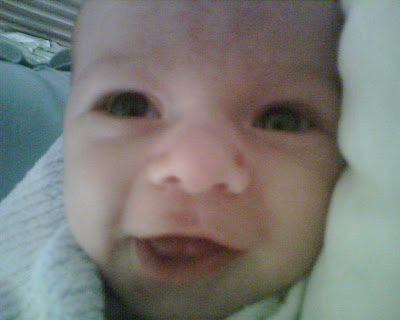 Now I know that I really am supposed to be a blond.

I will leave this testimony with you.


Are you looking for a new stylist? Totally try Ashlee at Platinum Studios in Orem. 371-8703. Tell her c jane sent cha.
Email Post