The Day I Got A Microwave 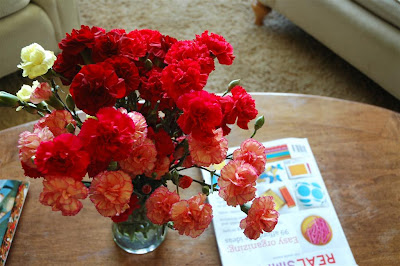 On account that my family deems the Fourth of July holiday more sacred than Christmas, this time of the year gets pretty intense. There are all sorts of family to-do's planned from mid-June to the first couple weeks in July. And if you don't know what a a "family to do" is than I suggest you go out and get yourself a fine Mormon family to chillax with this summer. I swear! (But not really because I am Mormon.)

This year is going to be a little different. Because Chup and I went out and bought ourselves the nice-sized Retro House we offered to board family members in our spare rooms. My eldest brother Steve and his wife Suze took us up on our offer. With them comes Alex, Emily, Jay and Maggie--an easy-going gang of considerable senses of humor. Also they travel with a dog named Daisy, who beat our Ralph in last year's Family Fourth of July Dog Show (another "family to do") for Best of Show. Rude.

They are coming from Southern Utah, a place that is scientifically hotter than Hades and as unforgiving as Metallica. I would only live there if I were a nudest. (And oh how I wish I were!) Leaving that sort of dry heat to a much cooler Northern Utah might shock their homeostasis. For this reason I suggested they bring a couple changes of socks, at least one wool hat and a pair of dry mittens. And--I added--it might be nice to invest in some heat activated hand warmers. And hot cocoa (because hot cocoa is so much better than hot chocolate) for our chilly evenings.

After having seen to it that my guests were rightly packing, I started preparing Retro House for their stay. I cut fresh flowers for the bedrooms. I made Chup re-caulk the guestroom shower. I put a new bouquet of carnations on the front table with readable magazines. When all was said and done I realized that the only thing missing was a microwave. Guests love a microwave! Especially my guests who once admitted to me that almost every family meal includes something that has been nuked for their digestive pleasure.

So I called Chup and asked him to (sigh) pick up a microwave (sigh) on his way home from work (sigh). After he welcomed me to the year 2008, he asked if I preferred one in white or stainless steel. And you know what I picked?

Of course you know what I picked!

We know each other so well.
Email Post
Labels: Ma Famille