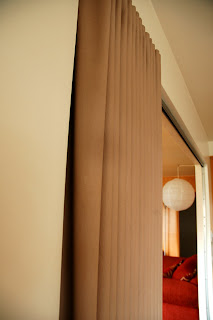 Are accordion doors that separate your front room from your kitchen really necessary? Sure, they've provided for a zillion baptismal font jokes (surprisingly never gets old) but what is the purpose of sectioning off the house?

Excuse me. I am just on this "what is necessary?" kick these days. It could be because of the little "kicker" in my belly (love the pun!) I keep asking mothers what newborn equipment is dire to have. A swing seems to be the popular answer, followed by a vibrating chair, and, coming in a close third, Scott Wiley's lullaby cds.

Truthfully, that third one was just a product placement. Scott already gave me one for free. But, seriously, it is good stuff. There are rumors about that a third album is in the making. I said "there are rumors about" but the truth is, Scott already told me he's making a third album. When I asked if I could sing a lullaby on the new cd he changed the subject real quick-like. Yes, I chose to be offended.

I feel it necessary to be honest about something that I wrote about the day I found out I was having a boy. I admitted that I cried because I thought I was having a lady-baby. The whole truth is that I cried because I knew this boy would be Chup's. Sure, I would love him to death (and beyond!) but I felt very strongly that my man-child wouldn't take after my vision of boyhood (I see now that mothers are entitled to that kind of information.) Subsequently, every time I dream about The Chief he has Chup's face. Weird, but it's not like I can order new dreams.

Boyhood to me came from the examples of five active brothers who (okay, all except our daring exception brother) had our family attending sporting events one right after the other. Meanwhile, Chup quietly whittled away in his basement bedroom taking apart the family microwave, adding after-market improvements and carefully completing the reassembly.

And so on that day that it was revealed that I should have a son, I knew that I would have to give up any expectations for The Chief's childhood. They weren't necessary to carry around. And no one way was better than the other. Besides, if Chup's boyhood made him the man his is today then I am going to be one lucky mother (with more free time than most?) (No post-baseball tournament carpools?) (We'll see . . .)

Now I am thinking, keep the accordion doors. One day The Chief will likely take them down, make major adjustments (automated opening/closing by saying a special code word) paint them
mustard and re-hang.

Oh this is going to be fun.
Email Post
Labels: The Chief