It's My Birthday Too Ya! 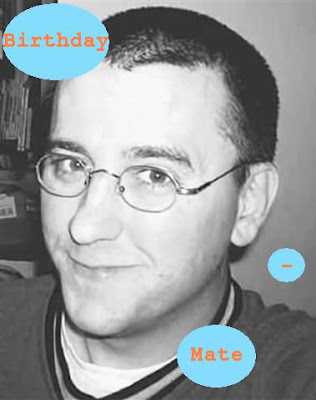 C. Jane's husband, whom she has pseudonymed "Chup" for purposes of this blog, is the only friend I have whose birthday I never, ever forget, not even for a moment. That is because it is the same day as mine. August 26, every year, like clockwork. Chup and I are both Virgos, and you know what that means! Nothing, because astrology is stupid. In fact, I believe among all zodiacal signs, it is Virgos who are most likely to think astrology is stupid.
You know who else shares our birthday, Chup? Macauley Culkin of "Home Alone" fame. Also, jazz musician Branford Marsalis, who was musical director of Jay Leno's "Tonight Show" from 1992-1995.
Plus: Composer Mark Snow (he did the music for "Twin Peaks" and "The X-Files"), New York Times crossword puzzle editor and nerd Will Shortz, and -- hang on to your hats and glasses -- Chris Burke, aka Corky from "Life Goes On"!!!
You should definitely look at the Wikipedia page for August 26 because you will learn all sorts of magical things about our birthday. For example, did you know that when it is our birthday, there are 127 remaining in the year? It is true! Makes you think, doesn't it?
Also, on August 26, 1498, while we were eating pre-birthday cake in heaven, Michelangelo was being commissioned to carve the Pieta. Did he stop a moment to ponder whether two Americans born on that day centuries later would ever gaze upon his work with admiration and awe? We'll never know.
On our birthday in 1920, the 19th Amendment was ratified, giving women the right to vote! And we've sure never heard the end of that one.
Some people have died on our birthday, too, which makes it sort of a sad day for those people's families, probably. Laura Branigan died on our birthday in 2004. Did you know Laura Branigan was dead? Well, she is. And it happened while you and I were reveling and making merry. Charles Lindbergh also died on our birthday -- in 1974, the very year I was born! As my mother was squeezing me from her womb, Lucky Lindy was expiring from lymphoma on the island of Maui. (Thanks, Wikipedia!)
Did you also know that Charles Lindbergh was a recipient of the Silver Buffalo Award, which is the highest adult award given by the Boy Scouts of America? You should seriously check out Wikipedia. It is full of interesting information like that.
Our birthday is not an American holiday -- YET. One or both of us will have to do something fantastic and far-reaching to make that happen. In the meantime, we can take comfort in knowing that it is Heroes' Day in Namibia (What is "Heroes' Day," and where is "Namibia"? No idea!) and the Sultan's birthday in Zanzibar. So we are in good company, Chup.
I hope your special day is full of joy and love, and not spent the way it was in 55 B.C., when Julius Caesar invaded Britain.
Your friend and birthday-mate,
Eric D. Snider
Email Post
Labels: Chup All Week