I first met Kentucky in the Denver airport on our way to London. We spent a semester hanging around England and taking trips to on large coaches together. Five years later we met again in an old apartment in downtown Provo. She had married MD, the brother to my beloved boyfriend-at-the-time Chup. A year after that, Kentucky became my sister-in-law. I will never forget visiting her in the hospital after the birth of their son Phun. Nor will I ever forget visiting her in the hospital after the second surgery of her lung. I know it is way cliche to say, but honestly, words cannot describe how much I enjoy, admire and love this sister of mine. Thanks Kentuck for being my guest blogger today. 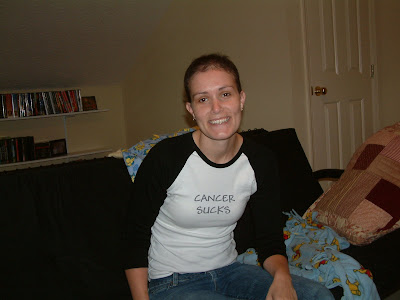 As Cjane said yesterday, we Kendrick women aren’t braggarts. But I do have to let you know something. I’m gifted. It’s not bragging because it’s actually true (kind of like if you gossip and it’s true, it’s not actually gossiping…). I’m an exceptionally talented eavesdropper. I can listen to and fully comprehend a large number of conversations at the same time. Some might call this stealthy ability “nosy” or say I don’t have anything better to do with my time, but it just isn’t true.

As cjane also mentioned (she talks a lot), I am currently working on this little case of cancer that I’ve got. So I sit around with my partially bald self and I have plenty of time to practice my social observation skills. I make people get me things and pull the “cancer card” whenever possible.

Anyway, every two weeks I go to get my poison. It’s not fun, but it’s still no time to slack on my training. For some reason, this highly efficient hospital has a 2 hour wait to get into the infusion room. It’s really annoying, but yet again, I get to hone my skills while pretending I am doing a HARD sudoku puzzle. And this is what I hear:

Usually to my left (it’s like church, everyone sits in the same place every week) is the Russian beauty queen. She’s engaged in a conversation with someone on the phone, speaking VERY LOUDLY in Russian (at least I think that’s what it is)—but it’s only Russian in the waiting room. In the treatment room it’s only English and Italian. She oozes intelligence and tenacity and, very importantly, she’s got a nice wig. She gives Russian lessons to the nice man sitting next to her, even when he doesn’t ask. “Boust vegg DA shnolett,” they repeat over and over.

Then, sitting in the corner with his significant other (I know about their relationship because they were talking about their children and how they appreciate that they’re good kids) is the man who, when he coughs, sounds as if he might be coughing up a large, marshy bog. He struggles a bit with what most of us take for granted—breathing. Since I have a few lung issues of my own, I have compassion for him—until my gag reflex starts to kick in and then it’s all about me and the bathroom.

The patient recipient of unwanted Russian lessons is the picture of kindness. He asks Miss if she needs help getting connected to the internet when she spews some words (I’m starting to pick up on this Russian thing) and gestures at her computer. He looks as if he might be someone’s dad or bishop, or maybe both. I look a little closer and see that he’s actually a missionary for them Marmons. After fixing the computer, he goes back to holding his wife’s hand.

My favorite fellow-in-waiting is He’s really yellow. I don’t mean “yeller”, as in cowardly, but I mean that his skin is actually a dark shade of orangish-yellow. I whisper underneath my breath that he must have some type of liver disorder and MD confirms my diagnosis. He knows everyone’s names and greets everyone with a huge smile and a raspy salutation. Every week I’m surprised when HE gets up and pushes his wife (they’re both wearing wedding rings) in to get HIS treatment. He’s selfless beyond belief.

Every few treatments I see Mr. Young. He’s probably not much older than I, but he has all sorts of things that I don’t have. He’s full of “new diagnosis” adrenaline and wants to know everything there is to know. I want to tell him not to worry about the small things, like rolling over on his chemo pump in the middle of the night, but he resourcefully finds an answer to his question that suits everyone. He asks his wife if she’s comfortable in the uncomfortable wooden chair next to him and offers to switch. She says she’s fine and they carry on.

I find myself wanting to borrow some of these people’s best attributes. Not so that they’ll have less, but so that I’ll have a little extra tenacity, humility, innocence, perseverance and courage to keep me going when I need it. And there are times when I definitely need it.

Pretty soon (end of treatment April 11th), boy oh boy, I’m gonna party like it’s cjane’s birthday again. And maybe I’ll be able to give back to the world and my family everything that I’ve borrowed this time around. Or maybe it’s all about sharing.

Who knows, someone might need some lessons on how to be the best spy-in-training around. Then I’m their girl.

What is it that you lend to the world? And can we share?