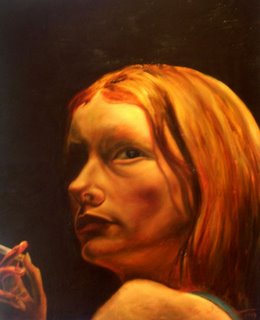 When Chup and I put an offer on our house we were in Provo's old Knight Block building which is home to the original Gandolfos, an ancient lift elevator, creaky floors and an ever-present musty smell. Presently, there is also a random flag store at ground level that peddles pirate paraphernalia, carries swastika flags, porcelain dolls and tapes of children out-singing patriotic soft-pop. All things loved by Provonians, really.
We had come to sign the papers that our real estate agent had tucked under his door. It was late and he had gone home to see his family and skateboard up and down the canyon. When we picked the person to help us buy a home, we first scanned their hobbies and general interests. This is a good ritual because after we signed on the final dotted line, our agent gave Chup a custom made long board.
All I got was this house.
As we read the contract together, sitting on olive green tightly woven carpeted floor, in the dimly lit hallway, our eyes both stopped. In plain print we simultaneously discovered that the former resident had, in fact passed on from this mortal existence IN THE HOME just months previous. Silently we looked at each other and wondered if we should go on in this pursuit. Wasn't it just a little creepy?
Over the next few days, I used my neighborhood contacts to find out information about the death that had taken place. Her name was Fiona. She was a dedicated smoker. Her passing was very sudden. She had lead a tragic life, losing two husbands without warning. She never got over the passing of her last husband and continued to put his boots next to her bed. She had died over a weekend and wasn't found for days later. No one really knew how long it had been.
The house was drenched in the stench of smoke. We did our best to spray it with KILZ. After a dozen coats, the house started to freshen up. The carpet was ripped out, floors restained. Our backporch was repainted and repainted until at last, the smell was just a sad memory. Last of all, I brought home the never-faileth smell test, my sister Lucy's nose. When she sniffed and gave me a thumbs up, I knew it was time to move in.
As every good ghost story goes, it wasn't long before lights started coming on in the middle of the night. I'd awake to see the living room light flicker on and off. I learned from the movie Beetlejuice that it's best to make friends with resident ghosts. So I told Fiona, in a trembling voice, to just "do her thing" and to "shake shake shake Fiona!"
And so it was that Fiona started spiritually smoking again in our home. She prefers our bedroom and puffs away while we are gone. We've tried every sort of scent, spray, plug-in, industrial odor-changing product, but Fiona's cigarettes overcome. Sometimes I smell it in the kitchen on quiet moonless nights . . .
a night like last evening, when I came in late from a festive party with friends and spiced cider . . .
Quietly I crept through front room lit in orange from the pumpkin lights. As I passed into the kitchen I knew Fiona was there, at my dining room table, smoking and laughing at me. Maybe she was remembering better times when she too went out with friends and had raspberry-pear tarts mixed with intelligent humorous conversation?
Too tired for a seance, I ignored her.
It has become procedure, that after detecting Fiona's presence, I flip the switch on the candle warmer. Not to be rude to the woman who relocated so that we could live here, but the smokers smell makes me feel like we are the ones who relocated. To hell.
I crawled into bed and kissed Chup good night. For a few moments I could hear Fiona puffing heavily out in the hall. Just leave the lights off tonight Fiona I begged. Can't you do your crossword puzzles during the day? Then it grew silent. Nothing moved. All was well.
I couldn't help but think, drifting off to sleep, how nicely my new pumpkin candle scent, subtly mixed with the trace of Fiona's smoke, made me feel surprisingly tranquil.
Right at home.